In his superior and still-relevant 1986 classic Cadillac Desert, Marc Reisner marveled at the arrogance that bade man think that the American southwest could be economically rendered agriculturally productive. The book offers the case, mostly convincingly but often shrilly, that the West now boasts a population that exceeds its natural ability to support.

Reisner draws the line at the 100th Meridian, claiming that natural features and weather patterns make anything east of this line suitable for settlement and cultivation, and any farm or city to its west a tenuous proposition at best.

That stuck in my mind, and I found myself watching the terrain and my GPS as we headed first east, and later back west.  Somewhere between 101° West and 99° West, whatever highway you are on, a visible change takes place. Heading East, desert gives way to more diverse flora, finally terminating in the relatively lush river valleys of East Texas. Farms begin to replace ranges and feedlots, and the feeling of life is in the air.

But the change goes deeper than physical geography. There is a cultural shift between west Texas and east Texas, one which I sum up thus: east Texas is Southern, and Dallas thus has more in common culturally – and physically – with Atlanta, Richmond, and Charlotte than it does with Midland, Amarillo, and El Paso. The latter cities are more firmly in the Southwest, rather more like Tucson or Albuquerque than Houston. You get the feeling that west Texas is the poor younger brother that everyone tolerates but really doesn’t like very much, more of a proving ground than a part of the state, more cowboy than Dixie.

We talk a lot about splitting California, but the real state that seems to beg for bifurcation is Texas, with the border running straight up the west 100th longitude. As a son of the Southwest, I’d be happy to welcome West Texas to the Union.

Dawn breaks over downtown Amarillo on our last morning in Texas. I’m up early in part to exercise, but in part because I’m anxious to get on the road. I tell myself that it’s because of how hot it is in the Southwest, but in truth I want to get my mother-in-law home and settled, and I want to get some peace and quiet myself.

We have had fun in Texas, and as I’ve said, I do love this place. Downtown Amarillo is in the middle of a renaissance, and this will be a place to watch in the coming years. But I have been in my own bed a scant three days in the past four weeks, and the road has temporarily lost its allure.

It is a bit over four hours to Albuquerque. We will be on the road in an hour, racing the rising sun and climbing mercury. Will it hit us or will it miss?

I have reached a certain age, I suppose, when I am starting to wear hats other than ball caps. My problem is that my head is somewhere around a size 8, so finding one that fits has proven impossible.

A good Stetson fur-felt hat has long been on my wish list. Fortunately, the Stetson-Resistol factory is in Garland, Texas, which is only about a half hour down the road from my sister-in-law’s place.

So after breakfast one morning while we were visiting, I dragged the whole family down to the Stetson factory, where they have a store onsite selling overstock, slightly irregulars, and the like. The young lady who helped me was able to locate, without much trouble, something that had evaded me for years: a size 8 fur-felt, in black.

I have a long head, and the fitters were able to steam and shape the hat so that lengthened and fit comfortably. I’m wearing the hat as I write this, “training” it to my head, ensuring that the hat holds its new shape, and gets even more comfortable over time.

It was more than a fortuitous happenstance – it was a wonderful experience, and to top it all off, the hat cost me about 1/3 of what it would have set me back at retail.

You can bet that on my next trip to the area, I’ll go back. It was, in truth, the only way to buy a good hat.

Sitting on the verandah at my sister-in-law’s Sarah’s spread on Lavon Lake in Farmersville, Texas. The day was warm but breezy, a welcome relief from the merciless heat gripping most of the Southwest. The hyper-vigilant dogs and the occasional flies punctuated but did not burst the chicken-clucking, cicada-humming reverie of the day. I sat enjoying the first unhurried, un-harassed moment of the trip.

Good things last not, and after an hour or so Sunny called me inside to socialize, and I left my perch hesitatingly.

But I felt like I had tasted something precious about Texas, a feeling last felt in the stands at a minor-league baseball game in Frisco ten months before. In my life I’ve visited but half a dozen times, and yet I feel an attachment to the place I find hard to describe.

Inside the windshield of my car, at the top center above the rearview, is a toll-tag from the North Texas Transportation Authority. I could, and perhaps should remove it at the end of the trip. But I know I won’t. It’s more than a souvenir: it’s a talisman.

Texas will never supplant California for me: I am far too attached to my native state. But there is a part of me that will always be Texan.

The exact opposite of a Sonic. No more Kosher, to be sure, but a far better way to spend my guilt-ridden calories.

When traveling, I always try to sample local cuisines, and I have yet to find a reason to exclude fast food from that maxim, provided that I can avoid pork, shellfish, and the mixing of dairy and meat. When in New York, I tried Shake Shack; in Tianjin, I enjoyed jian bing; in San Diego I developed a love for Mexican fast food, and in Los Angeles, the food trucks.

In Texas, we are offered Smash Burger, Whataburger, and Sonic. Yes, these choices are available elsewhere, but they’re difficult to find in California, so we sampled.

The results were not unsatisfying, but they did little to edify our diets or our spirits. If anything, I came away from this trip more convinced than ever that my long-term trajectory to a greater observance of Jewish dietary law was the right path – as much for my heart as for my soul. 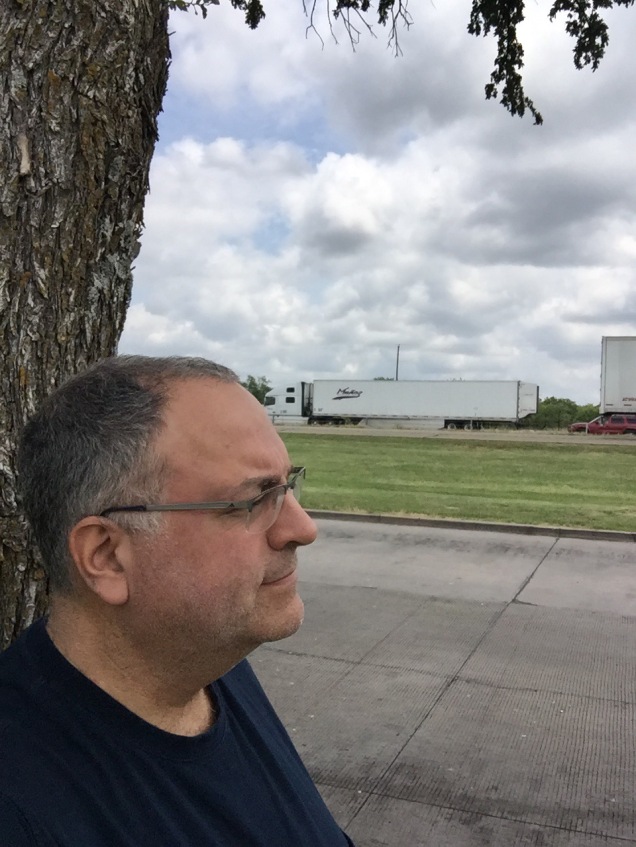 Traffic in the Dallas-Fort Worth area is beset by an all-but-opaque toll system, non-stop construction in the most inconvenient places, and an infestation of aggressive drivers who seem perched on the very knife-edge of homicidal road rage.

Before diving into the morass of weekday rush-hour greater Dallas, I paused for a quiet moment at the Callahan County rest area in Clyde, Texas, looking East under a breezy summer sky. Leaning against the tree, heedless of the darting birds and passing trucks, I felt good about what I was doing. On what would have been my father’s 91st birthday, I was driving my family across the country to pick up my mother-in-law and bring her back to California.

It was something my dad would do, I thought, and he would have been proud.

As that thought crossed my mind, a butterfly – my father’s totem/petronas/spirit animal – floated past me, flapping in an eddy.

The sun came from behind a cloud. And I went back to my car, renewed, ready to take on all of Texas.13

Cracker Barrel is for my family what Denny’s was to me growing up as a kid: a dependable place to take the family for a meal with a broad selection, good quality, and cheerful service.

Not to mention apple butter.

I know that this place is not everyone’s cup of espresso, but we love it.

Sunup outside the hotel room. The thermometer reads 88F and the jackrabbits are on dawn patrol, probably figuring that they’ll need to get undercover before the morning sun starts roasting them inside their skins.

If I ever live outside of California, I suspect it will be somewhere cradled by New Mexican mountains. There is something potent and deep about this land, a crossroads of regions, of cultures, and more. New Mexico is connected to the past by its long and contiguous Spanish heritage and to the future by its growing role in propelling man to the stars, and yet somehow manages to exist in a remarkable present.

Urban planners and Federal statisticians lump Las Cruces together with El Paso and Ciudad Juarez as a single metropolitan area. From Austin, Washington, or space, the town may look like El Paso’s northern exurb. Culturally, though, Las Cruces stands closer to Albuquerque, and strikes me as the southern redoubt of New Mexican culture, holding the line against the slightly insecure swagger of Greater Texas.

We’ve been here twice, and both times I’ve regretted not tarrying, even though both trips saw us pass through town in the heat of summer. Next time, we’ll stay for a bit, popping up to White Sands, touring New Mexico State, and sampling the Spotted Dog IPA before meandering east to Roswell or north to Socorro.

I think, though, we’ll aim for Fall or Spring…

My Tweets
The Chinafornia Wolf
Powered by WordPress.com.