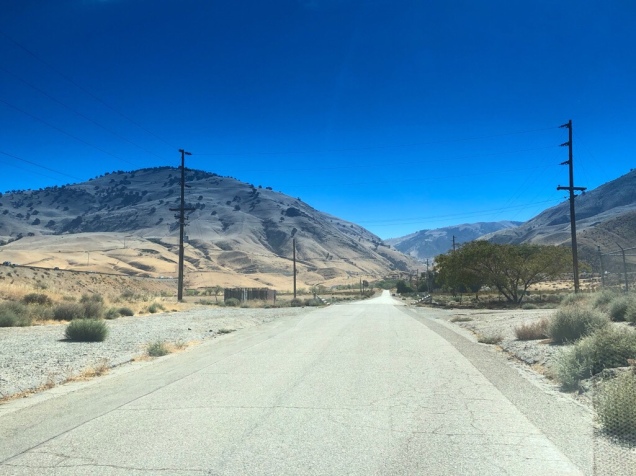 I pulled off of Interstate 5 at Grapevine looking to see if I could find history. To my delight, I found it, almost hidden, all but forgotten,  and ignored by tens of thousands who drive past it each day.

This, from the mouth of the Grapevine Canyon in the San Joaquin Valley, is a forgotten vestige of what was once the main highway between northern California and southern California: a two-lane road winding up Grapevine Canyon to Lebec, then over and along a series of ridges until dropped into Castaic north of Los Angeles in a tangle of descending hairpins.

Perilous in the best of times, any kind of seasonal weather made the road treacherous if not vicious. During the Depression, there were sections of the road that had a “passing lane” that could be used by cars coming from either direction, with what in hindsight were predictable results. As a little girl, my mom had a friend whose father was a California Highway Patrolman. He used to enthrall their group of friends with horror stories about the accidents he saw along what was then called The Ridge Route.

The evolution of America as a nation over the past three centuries has been enabled by transportation links, from the Baltimore Pike, the Cumberland Gap, and the Erie Canal to the Oregon Trail, the Transcontinental Railroad, Route 66, the Interstates, and, what was arguably World War II’s greatest legacy, the most extensive civil aviation infrastructure on the planet.

Too many of those stories are on the verge of obscurity. This is unfair. They deserve to be told, and heard, by a generation that takes such links for granted, if for no other reason than to better understand the nature of the sinews that hold our naturally centrifugal country together.

Because when you think about it, the taste of toast is the lesser half of the whole experience. The tongue is pleased by the shmear, not the hot, dry bread.

I promise to continue to tell myself this, especially as I walk past the bakery on my way to breakfast tomorrow.